Sel Gem gifts Guillaume Macaire his seventh win in the Grand Steeple-Chase de Paris, and this enables the horse's co-trainer Hector de Lageneste to break the ice in this race, whereas the Papot family are the on the mark for a third time in the feature.

Favourite for the Grand Steeple-Chase de Paris, the 5-year-old Sel Jem honoured his role by winning the most prestigious race of the French racing calendar.

Jumping impeccably under his 42-year-old pilot Johnny Charron, who was winning his first Group 1 race, the winner applied the after burners in the latter stages by leaving Gex eight lengths adrift in second. Irish rider Franco de Port took third, having finished ahead of two horses trained by François Nicolle, Niko Has and Happy Monarch.

Sel Jem can also aspire to an additional bonus, worth €75,000, which will be awarded in the event of achieving the Grand Slam - if he adds the Prix La Haye Jousselin to his list of accomplishments in the autumn!

Sel Jem enabled Guillaume Macaire, his trainer, who now trains in partnership with the young Hector de Lageneste, to win this mythical race for a seventh time. He thereby becomes the new record holder in terms of victories in the race, having now eclipsed Bernard Sécly. The above training partnership is based at the La Palmyre racecourse, near Royan (Charente-Maritime).

The horse carries the colours of the Papot family, which also made their mark 24 hours earlier in the Grande Course de Haies d'Auteuil (see below). Originally from the Nantes region, the Papots have dominated the French jumping owners’ rankings for the past ten years.

Their blue and green colours were winning the Grand Steeple for a third time following the successes of On the Go (2018) and Bel la Vie (2013). The winner was bred in the Orne region by Florence Lormand. 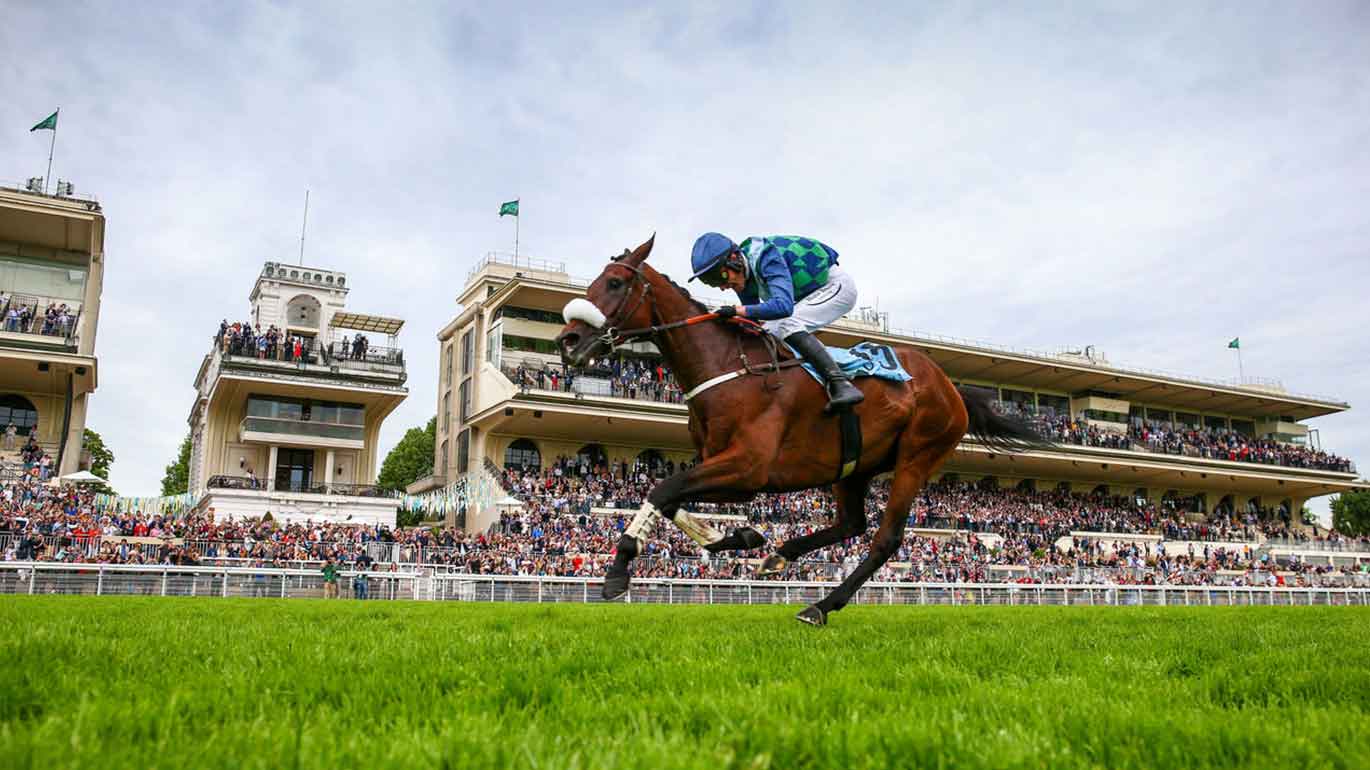 The Grand Steeple-Chase de Paris weekend comprises two consecutive days of top-class sport, including some of the best jumps races in France.

Over a week-end, Auteuil racecourse hosts 10 hurdles races and 5 steeplechase races, including the Grand Steeple-Chase de Paris, which lends its name to this weekend of thrilling horseracing action! 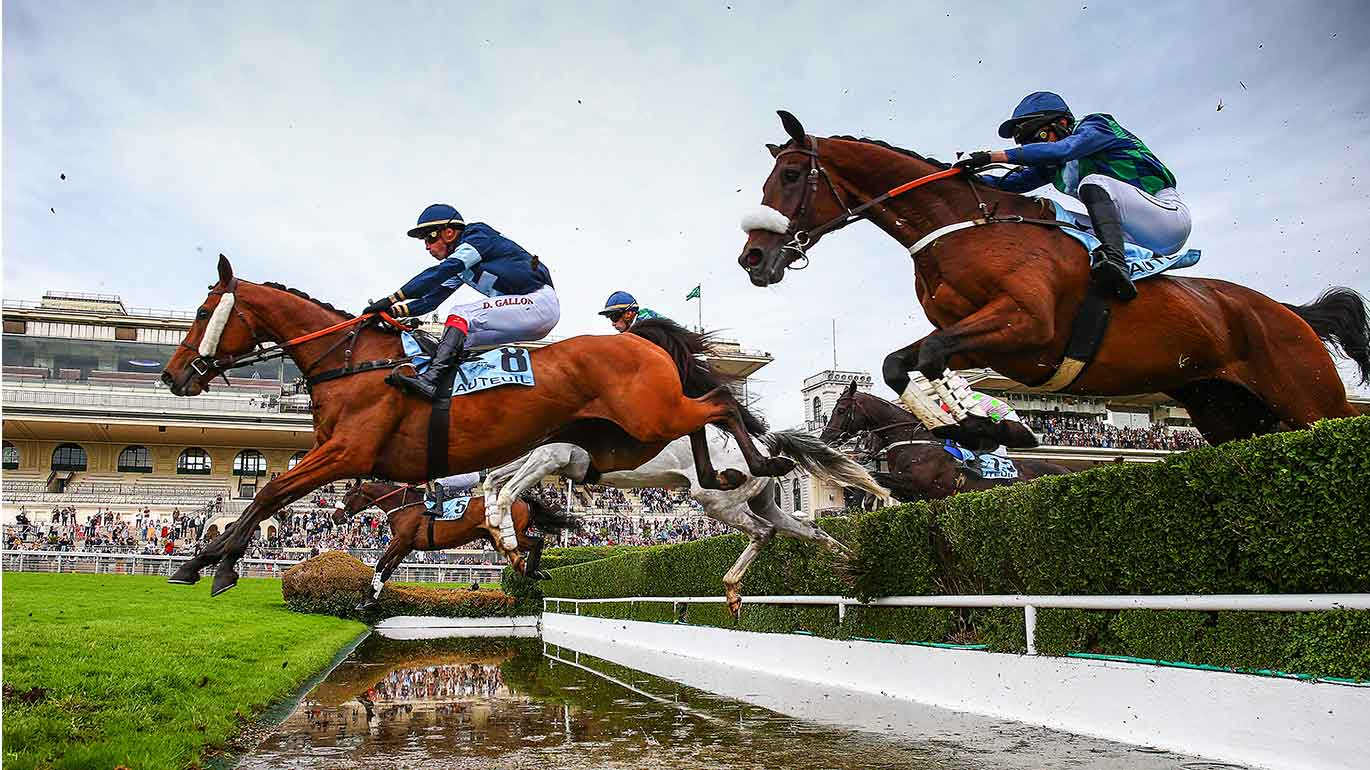 The Grand Steeple-Chase de Paris is a highly spectacular race, and one of the year’s most important sporting events.

The world’s most talented thoroughbreds coupled with highly experienced jockeys launch themselves onto the 3-mile 6-furlong course, the longest steeplechase course at Auteuil, which is dotted with 23 obstacles of various sizes and difficulties.

After 7 minutes of exertion comes the compensation!

Winning the Grand Steeple-Chase de Paris is a true exploit, a dream come true for all jump jockeys, owners and trainers. It is the culmination of their whole career, a huge triumph!

THE GRAND STEEPLE-CHASE DE PARIS IS: 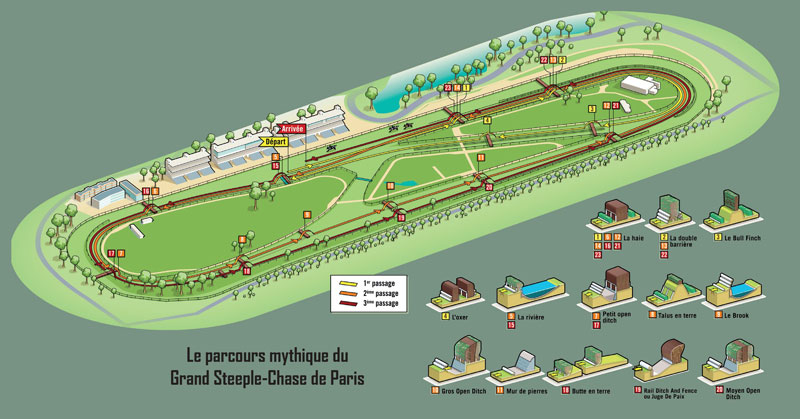 THE MOST DAUNTING OBSTACLES: 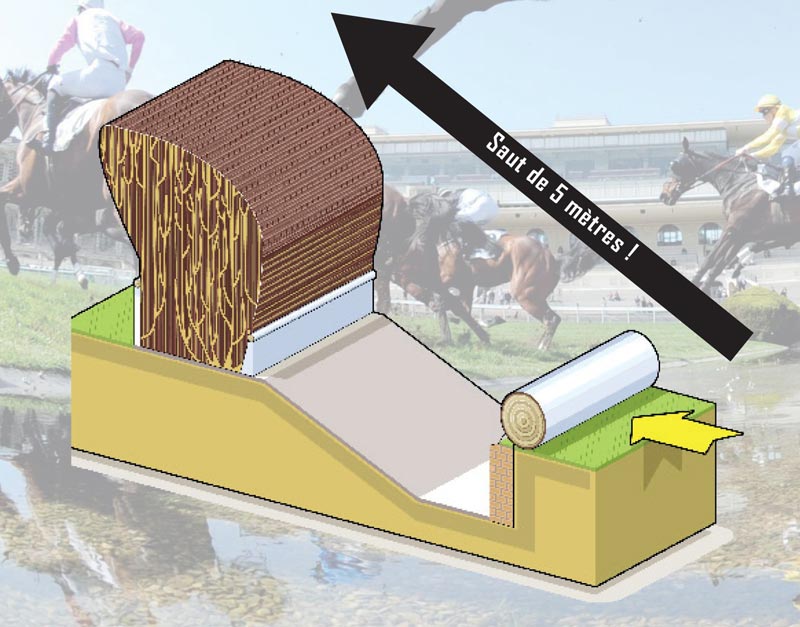 An obstacle of awe-inspiring proportions, which proves critical for victory!

This is the most daunting obstacle on the course, thanks to its massive proportions.
The horses must jump 5 metres across and 1.70m high to clear this combination, which is made up of a high rail, a deep ditch and a tall hedge.
Jumped at the end of the course, it is also known as the “Juge de Paix” as it is often a critical obstacle for victory. 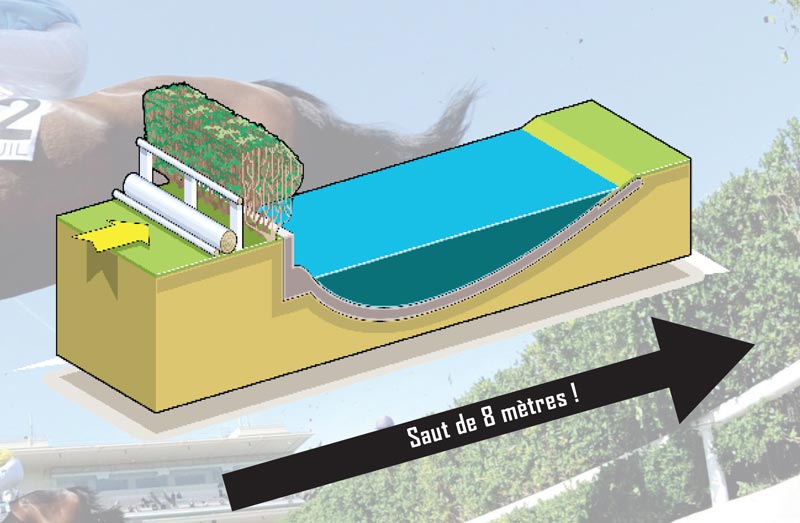 Located just in front of the grandstand, this obstacle is made up of a hedge hiding a water jump, and requires the horses to jump 8 metres across! The Rivière des Tribunes features twice in the ZEturf Grand Steeple-Chase de Paris course!

Hurdles races:
Hurdles races include a minimum of 7 obstacles to jump. These 7 “hurdles” are identical and are 1.10m high.

7 minutes of intense effort for the horses and their jockeys

3 miles 6 furlongs long, one of the year’s longest steeplechase races

A maximum of 20 horses at the start, coupled with highly experienced jockeys

THE CROWNING OF THE BEST STEEPLECHASER SINCE 1874 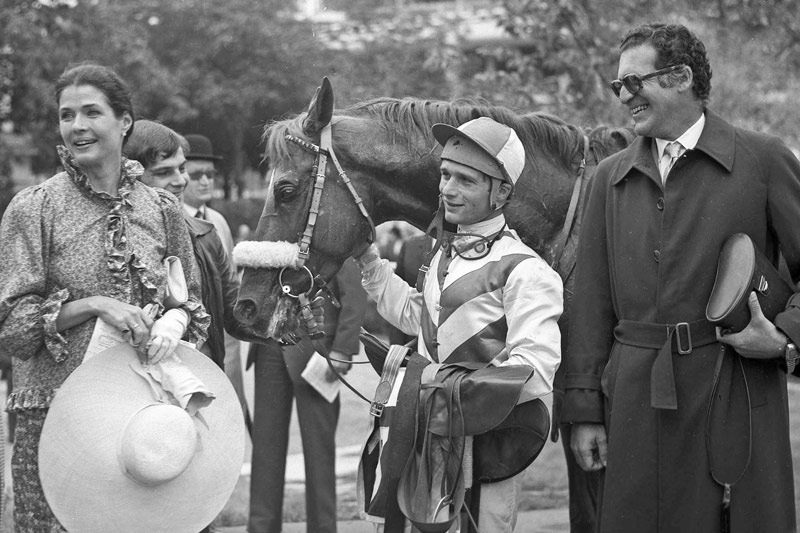 Originally called the Grand National d'Auteuil, the mission of this race was to become as prestigious as the British Grand National, held in Liverpool.

Its distance, having slightly varied over the centuries, is now set at 3 miles and 6 furlongs and requires exceptional stamina from the four-hoofed athletes. 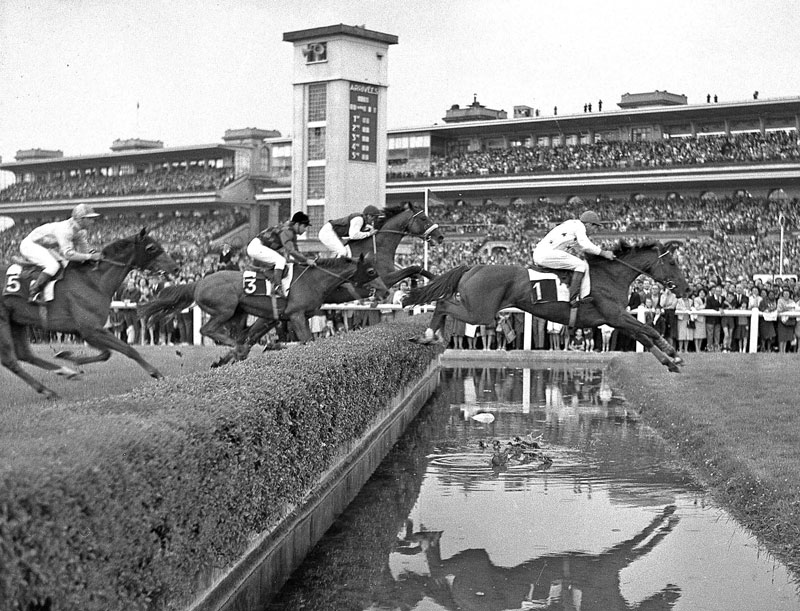 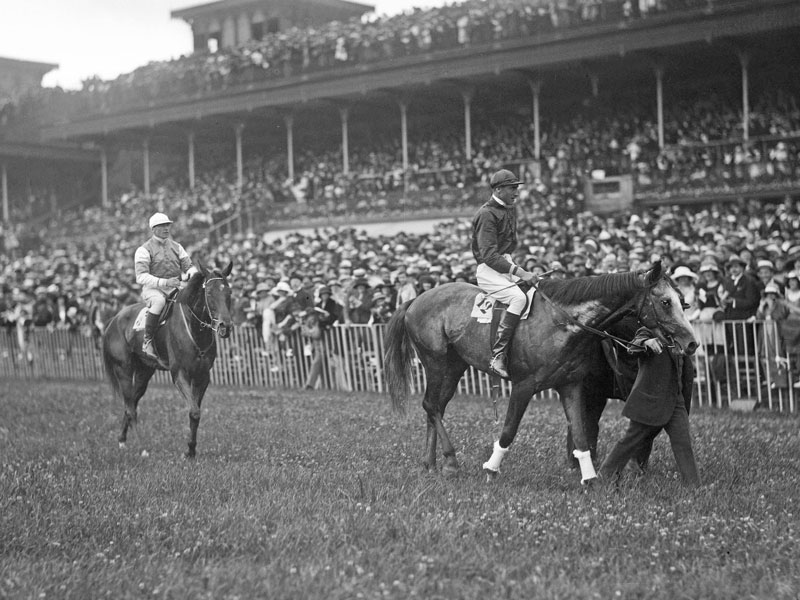 Among the thousands of horses to have competed in over 139 editions of the event, only a handful have been able to win the race more than once.

Over the years, three racing legends have been unveiled at Auteuil, a trio of illustrious mounts who managed to win the world’s most selective jumps race on three separate occasions! 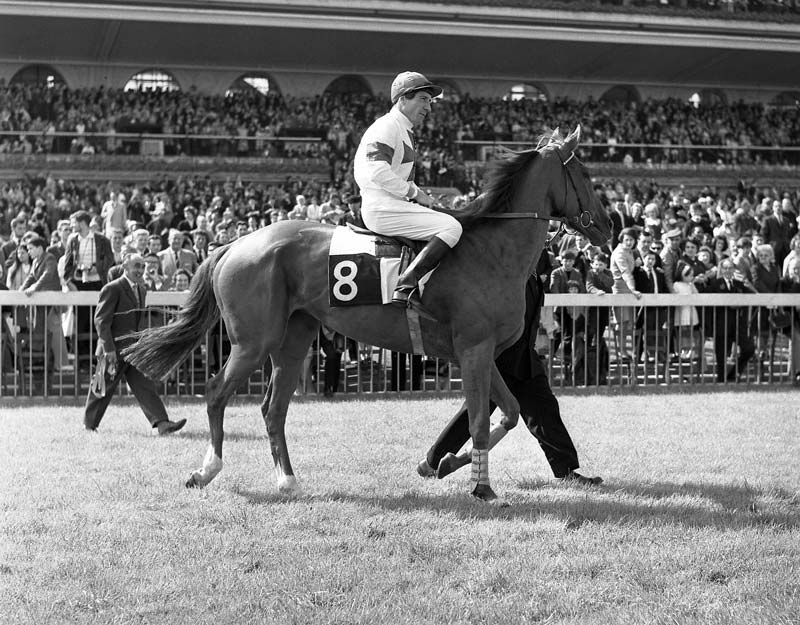 Watch the champions prepare in the first-ever edition of the Grand Steeple-Chase Masters!

France Galop is launching the first-ever edition of the GRAND STEEPLE-CHASE MASTERS.

Thanks to a variety of content posted on the @FranceGalop social media pages, the objective is two-fold. Firstly, to allow racing fans to boost their knowledge of the jumps discipline, and secondly to follow the champions’ preparations and the thrilling races scheduled in the run-up to the legendary Grand Steeple-Chase de Paris.

This race is renowned for its record-breaking distance of 3 ¾ miles on Auteuil racecourse, its 23 spectacular obstacles and its 820,000-euro purse, making it the most richly-rewarded race in the jumps calendar.

The GRAND STEEPLE-CHASE MASTERS are scheduled between the end of February and the end of April and consist of six Grand Prix run over the jumps at Auteuil racecourse: Prix Robert de Clermont-Tonnerre, Prix Troytown, Prix Murat, Prix Ingré and Grand Steeple-Chase de Paris. 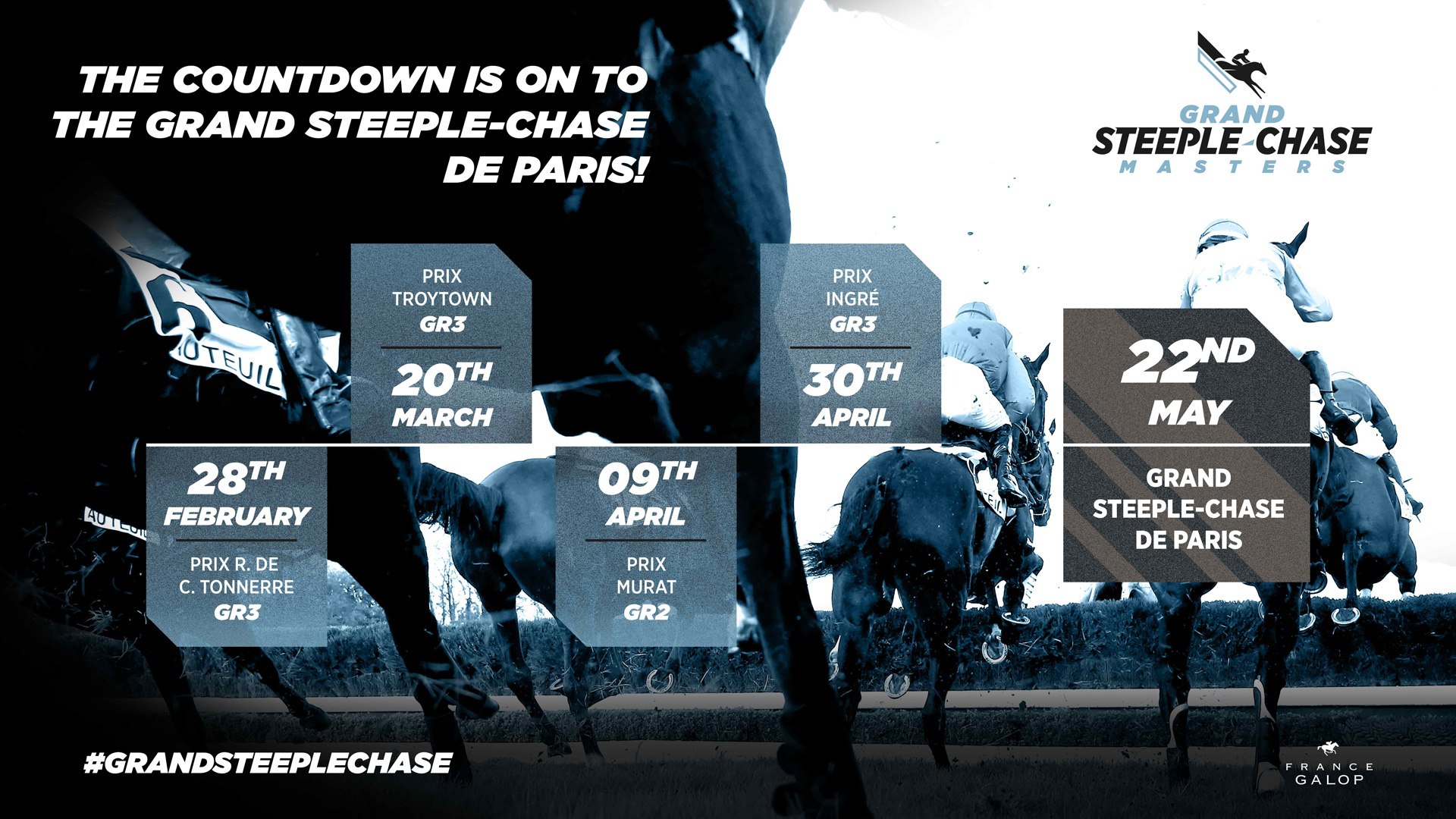 Do you know everything there is to know about the Grand Steeple-Chase Masters?

☀️ Take part in our quiz for the chance to win a host of great prizes, including an unforgettable day out at the Grand Steeple-Chase de Paris!

PLAY (in French only)

GIVE YOUR CHILDREN A TREAT!

Choose your mount and take a turn on our traditional merry-go-round with your whole family! You can have as many goes as you like, and children ride free of charge! 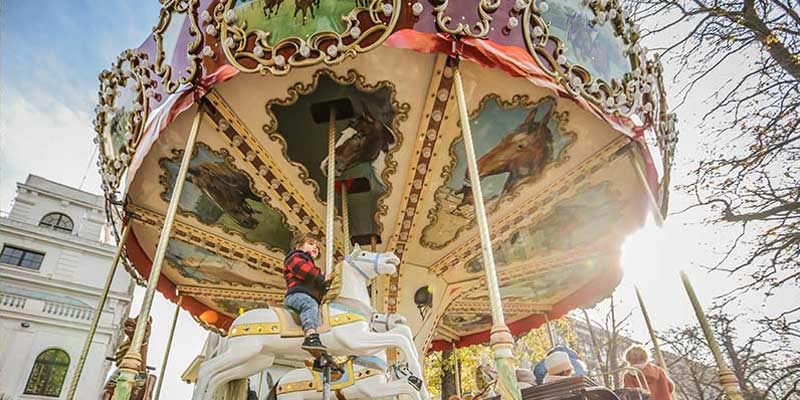 Treat your children (aged 3 and over) to a free pony ride! Our “unicorn” ponies are on hand to give tiny tots a magical first experience in the saddle! 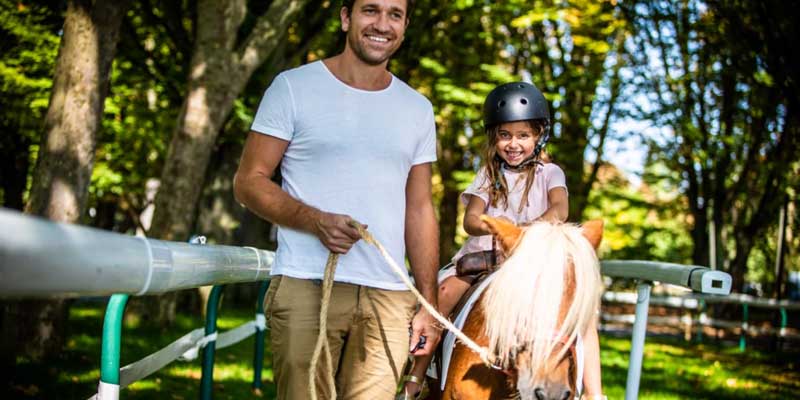 Ready, set, go! All young racegoers are invited to take part in our sack races and Pony Hop Race organised on the racecourse.
Your children will be at the very heart of the action! 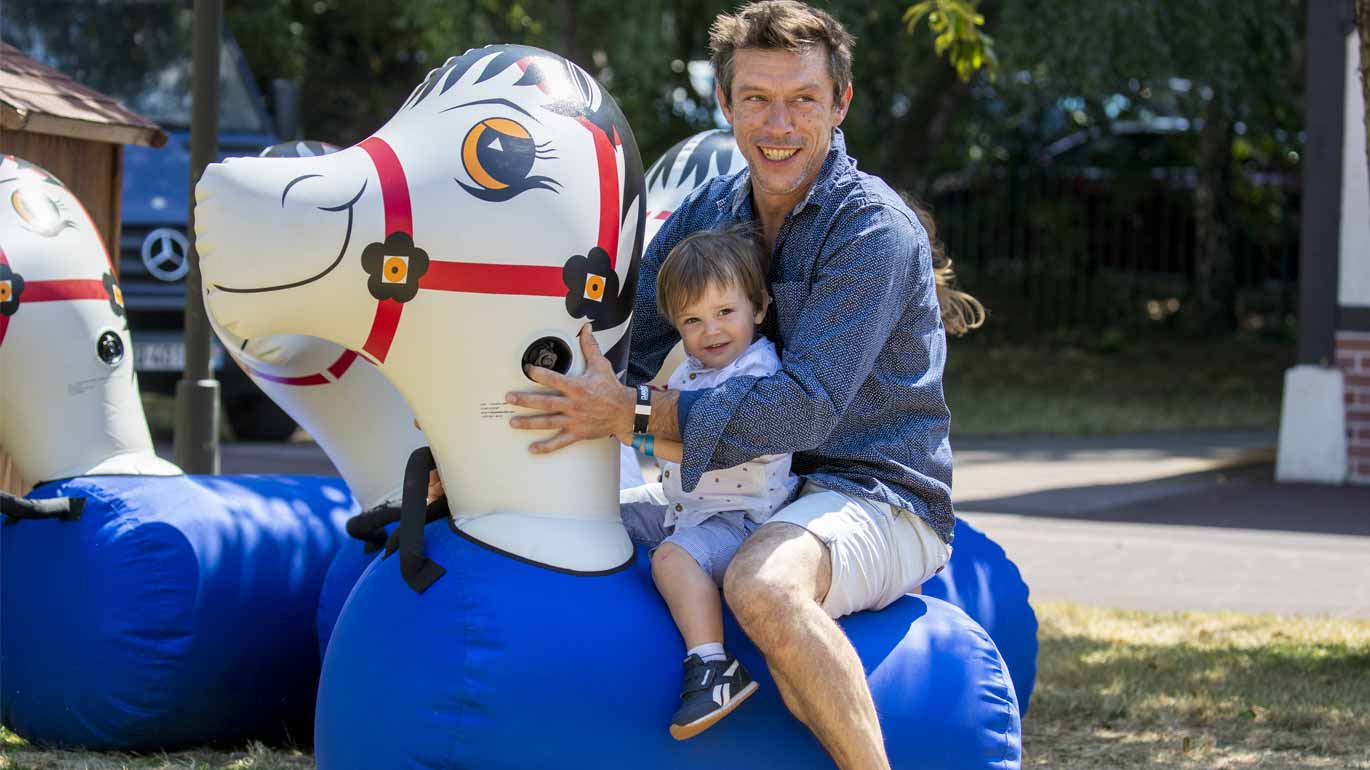 Fancy an adventure? These new-generation rocking horses take children on a wonderful ride around the racecourse!

A fun and safe introduction to life in the saddle. 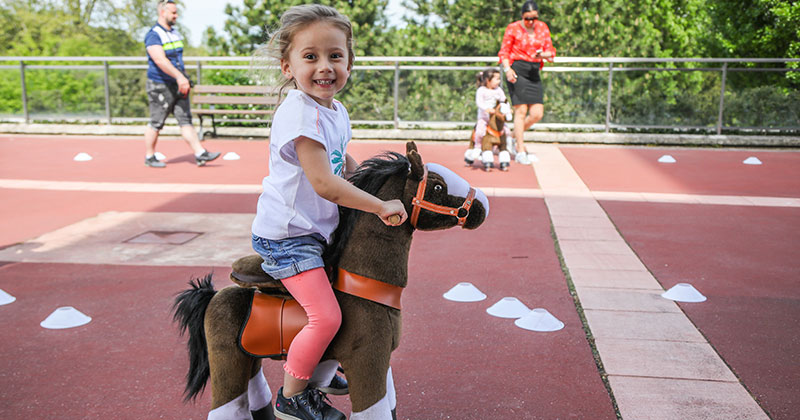 Children are also invited to play on our new bouncy castle, which is open all day long! 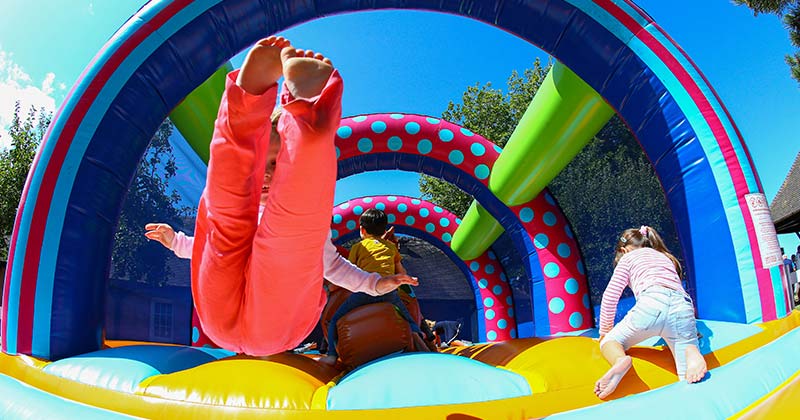 Armed with a booklet that features a host of racing-themed games, children are invited to take part in a treasure hunt to discover the racecourse  and its typical sites.

A 45-50 minute itinerary, with a certificate and special gift up for grabs! 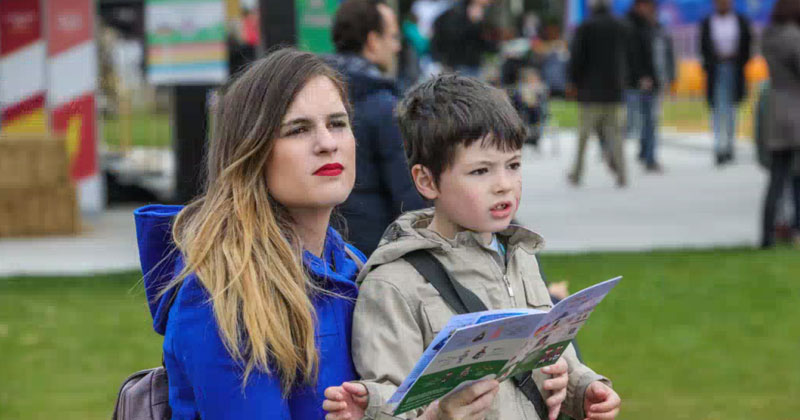 Ready, steady, go! Young ones are all invited to take part in a foot race on the track.

And to make their Sunday even more memorable, they will have the chance to join the jockeys in the parade ring

Animation available on certain dates of the "Hippodrome en Famille".  Registration required on the day of the event, subject to availability.

Plus plenty of other surprises… So, are you in?

Entertainment and visuals are non-contractual and subject to change by the organisers.

At Auteuil racecourse, you can admire life-sized replicas of the racecourse’s two most legendary obstacles, to give them an idea of what the horses and jockeys are faced with.

The Rail Ditch and Fence is a truly formidable combination, and the Rivière des Tribunes requires the  horses to jump over 8 metres across! 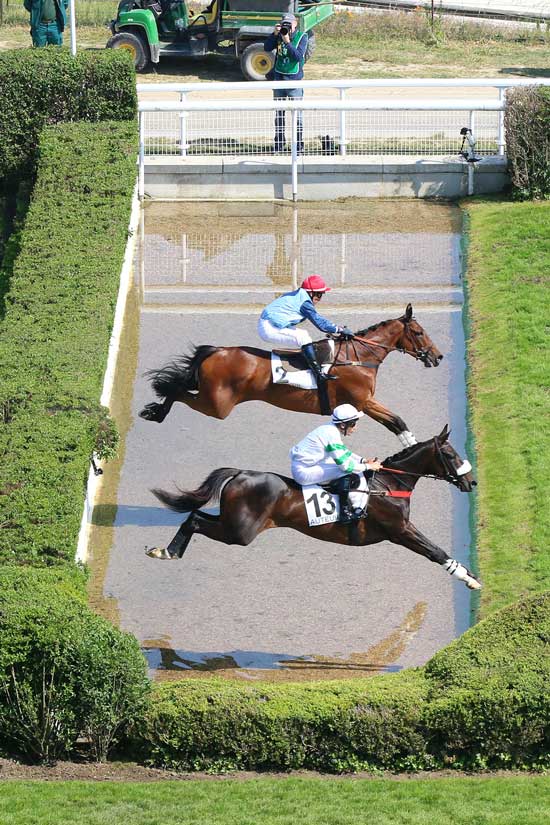 Learn everything you need to know about horse racing thanks to our coaches !

Our racing experts unlock you all the secrets of this exceptional sport to ensure that you could make the most of your day.

*“General Category” entry free of charge for under 12s 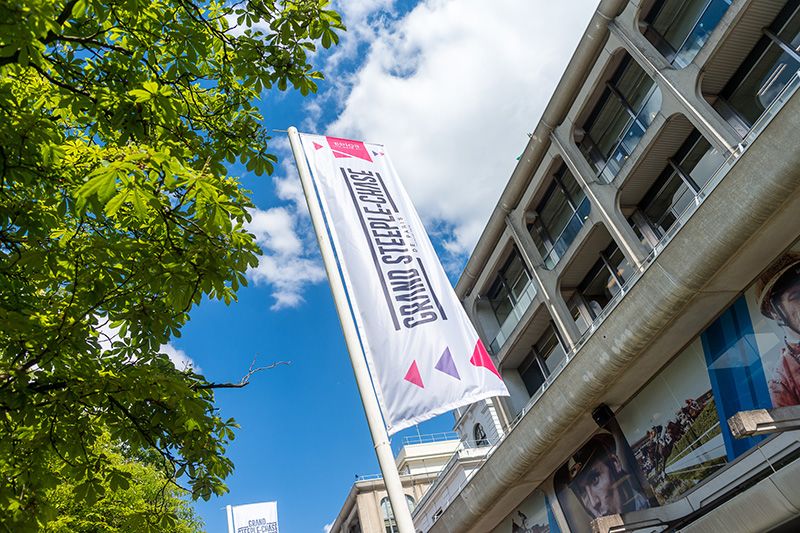 2 How to get to Auteuil

HOW TO GET TO AUTEUIL

Metro
Line 10: Get off at “Porte d’Auteuil – Hippodrome”

Experience the thrill of jumps racing from our lounges just outside Paris ! 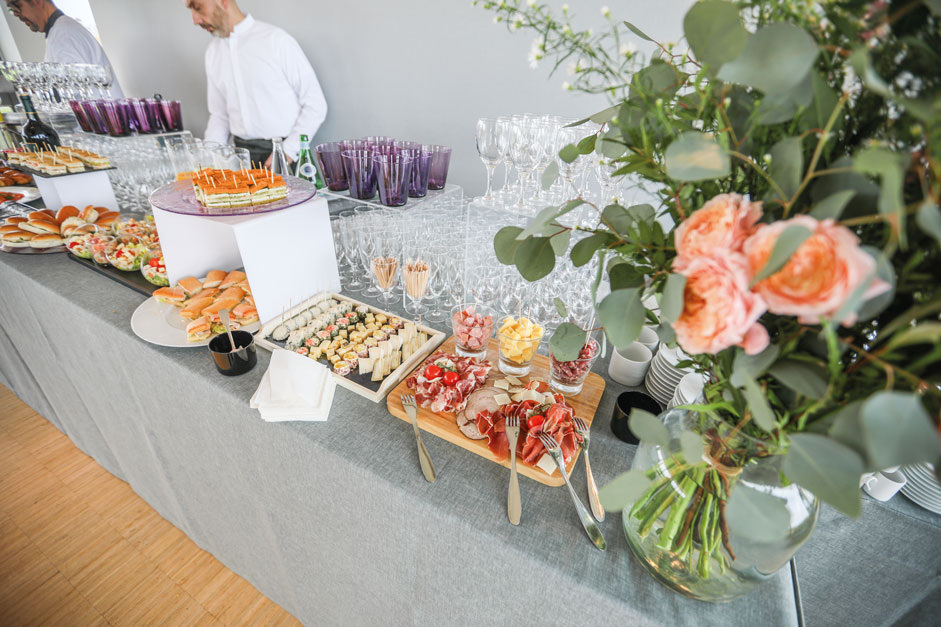 Treat your guests to a memorable reception in our elegant lounge

- Personal welcome in the lounge and seat in the stands
- Cocktail lunch reception, soft drinks, wines and Champagne at will*
- Acces to Weighing Area
- 1 parking space for every 4 people 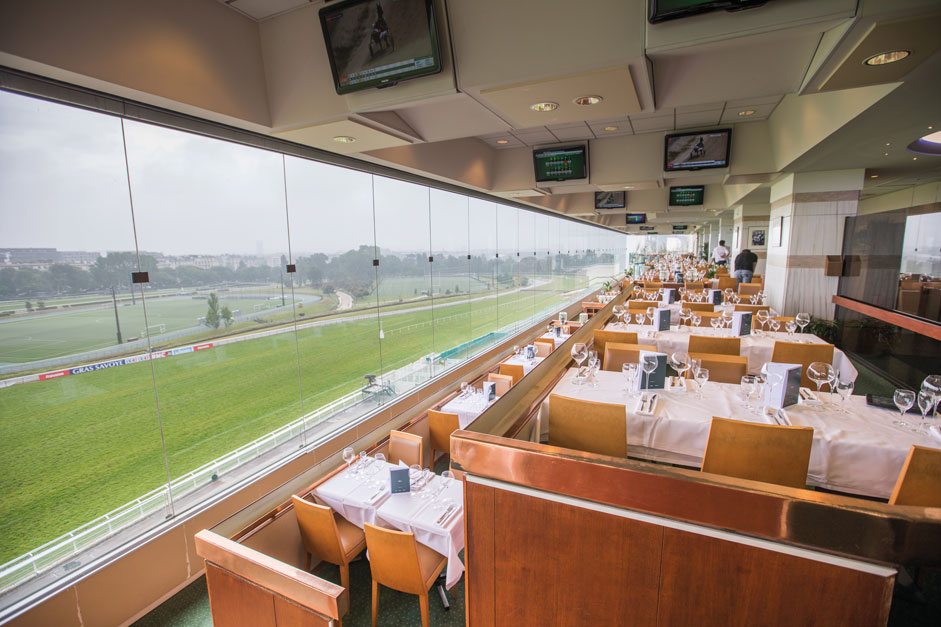 - Personal welcome
- Acces to Weighing Area
- Lunch in the Panoramic restaurant
- Official cocktail reception, in the Prestige lounge, soft drinks, wines and Champagne at will*
- Free 10€ betting voucher**
- 1 parking space for every 4 people 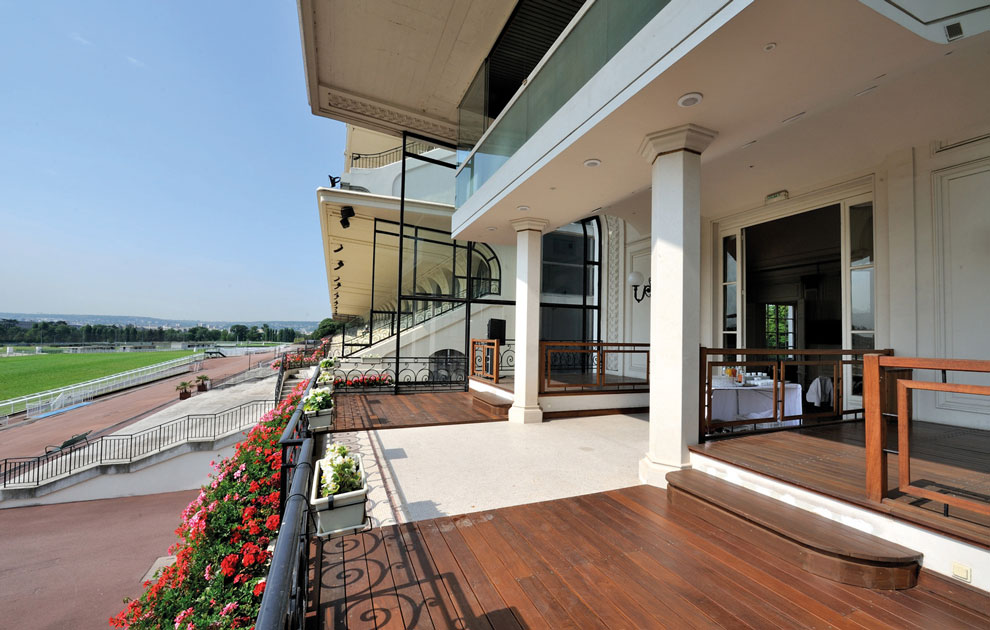 - Personal welcome in a private lounge

- 1 parking space for every 4 people

Pictures and offers none contractual.

Alcohol abuse is dangerous for your health, please drink with moderation.

For the 2020 edition, we decided to pay a lot of attention on your accomodation in order to make sure you will have a great journey.

Our partner Revolugo has selected and negotiated the best accomodation deal evers in order to make sure you will have a great journey.

The Haras d'Etreham, a historic breeding stud in France, is supporting the jumping discipline by associating itself with a series of races dedicated to fillies starting with the Haras d'Etreham Prix d'Iéna (Listed). 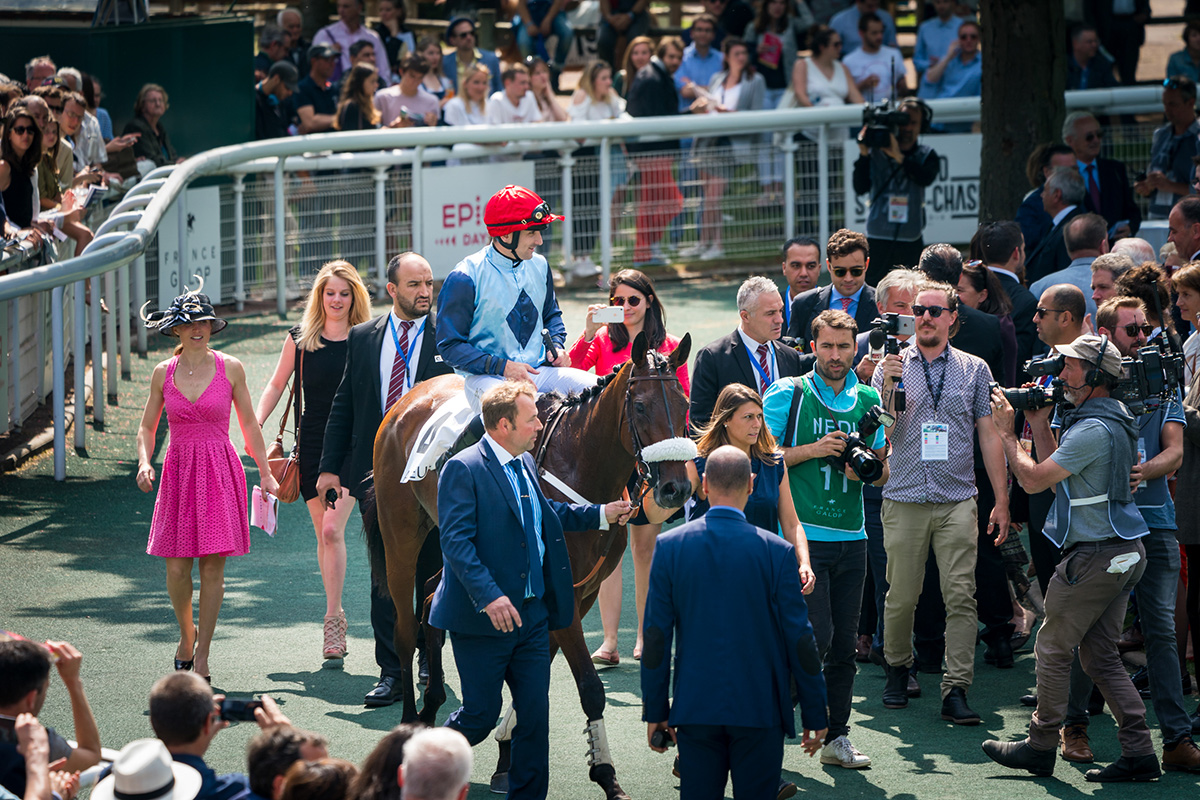 Equidia is the go-to TV channel for horse racing, and is available from all network operators.

In teaming up with the Grand Steeple - Chase de Paris, Le Parisien is once again undescoring its sporting DNA and its commitment to the Paris region and large scale sporting events.

RMC, which stands for Radio Monte-Carlo, is a general-interest radio station. Get all news and sport live on RMC.fr.

IF YOU HAVE ANY QUESTIONS, 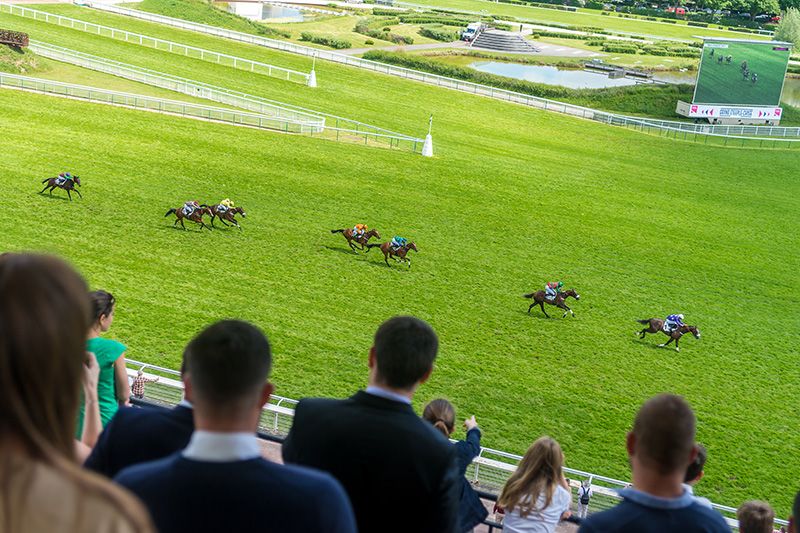 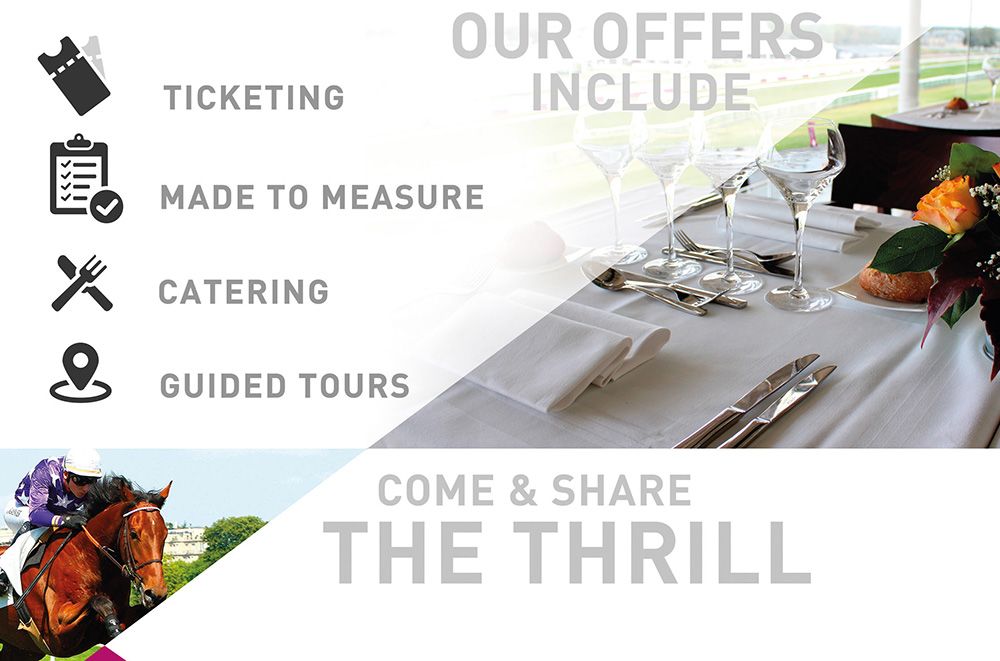 For any group or corporate inquiries, please contact us