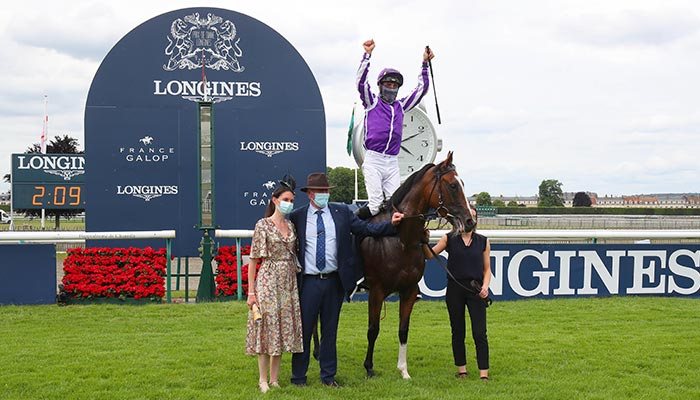 The Irish filly Joan of Arc, ridden by the Basque jockey Ioritz Mendizabal and trained by AidanO'Brien, came up trumps in the Prix de Diane Longines at Chantilly on Sunday. It was a scenarioreminiscent of the Qatar Prix du Jockey-Club, which was run at the same course on 6 June.

Aidan O'Brien, based in Ireland, is one of the most successful trainers in Europe...

However,incredibly, he had never won either the Qatar Prix du Jockey-Club or the Prix de DianeLongines prior to this season: and Ioritz Mendizabal, entrusted with the task of piloting bothSt Mark's Basilica and Joan of Arc, has subsequently enabled him to achieve this particularHoly Grail.

Joan of Arc is owned by Coolmore: one of the mega-powers of the thoroughbredindustry. She is a daughter of the greatest stallion currently in activity, Galileo.Ioritz Mendizabal, 47, was one of the most experienced jockeys in the classic.

He boasts threewins in the Qatar Prix du Jockey-Club, but this marked his first victory in the Prix de DianeLongines. He also numbers four Cravache d'Or titles: the accolade which goes to the jockeywhich has won most races in a calendar year.

The Prix de Diane Longines has Group 1 status, the highest standard of horse race, and is reserved for the new generation of 3-year-old fillies.

The filly that demonstrates the most talent and wins the race is in with a good chance of lining up at the start of the Qatar Prix de l’Arc de Triomphe, which is held a few months later at ParisLongchamp racecourse.

This historic race will be watched in 60 countries!

Ever since this event was created, its renown has constantly increased in both France and abroad, and it is now one of the most eagerly-awaited dates in the racing calendar.

This race is also famous thanks to its stunning backdrop: the Chantilly course sits beside the magnificent Princes de Condé stables and the Château de Chantilly.

This event’s reputation goes way beyond the realms on the racing world, and it is always associated with a chic picnic in the grounds of the château, the sound of a concert by a popular artist, and the customary parade of elegant “demoiselles”.

THE BEAUTIFUL STORY OF THE PRIX DE DIANE LONGINES

The extraordinary exploit of Samuel de Barros, owner of the filly Channel

On that day, this new owner presented his one and only racehorse, a filly called Channel, as a starter in the Prix de Diane Longines.

He went on to have one of the best days of his life!
This magnificent filly defied all odds to win the Prix de Diane Longines.

In his Diane debut, Samuel de Barros sealed a victory that some wait years to achieve.

Just after the race, this delighted owner explained that he bought Channel to share his wife’s passion for horse racing and in memory of his father, with whom he watched racing as a child.

The filly Channel now lives at the couple’s stud farm, which is located in the Orne. Channel has given birth to her first foal, a filly that is “pretty as a picture”, said Samuel de Barros.

In 2022, the Prix de Diane Longines will celebrate its 173rd edition.

The world’s greatest race for fillies is held in the historic setting of Chantilly, whose course sits beside the stunning Princes de Condé stables and the Château de Chantilly!

The distance of the race run on the Chantilly course. The finish line is slightly uphill, which demonstrates the outstanding physical attributes of the fillies entered in this grand prix.

The age of all of the fillies running in the Prix de Diane Longines. They are the new generation of rising stars and only have one shot at being crowned queen of the Diane!

The year that Highclere won the race. This filly belonged to Queen Elizabeth, who travelled to Chantilly to watch her filly in action.

French-trained fillies tend to do well in the Prix de Diane Longines and have won 7 of the last 10 editions. The nationality of the winning horse is decided by the country in which it is trained.

In these two editions, two fillies were declared joint winners after passing the winning post at exactly the same time (dead heat). The owners decided to rerun the race to decide the final winner!

For the 2021 Prix de Diane Longines event, Chantilly racecourse was only able to welcome a maximum 5,000 spectators due to the health situation.

The event was adapted, but the vast lawns on the edge of the course were open for the traditional chic picnic!

1 A chic and glamorous garden party

A CHIC AND GLAMOROUS GARDEN PARTY

They were all too happy to enjoy a day out with their family and friends!

They admired the beautiful Château de Chantilly as they savoured a delicious country picnic in the racecourse grounds.

While there, they took advantage of the free entertainment for families: giant games (sudoku, dominos, memory game), sack races, merry-go-round, and more! 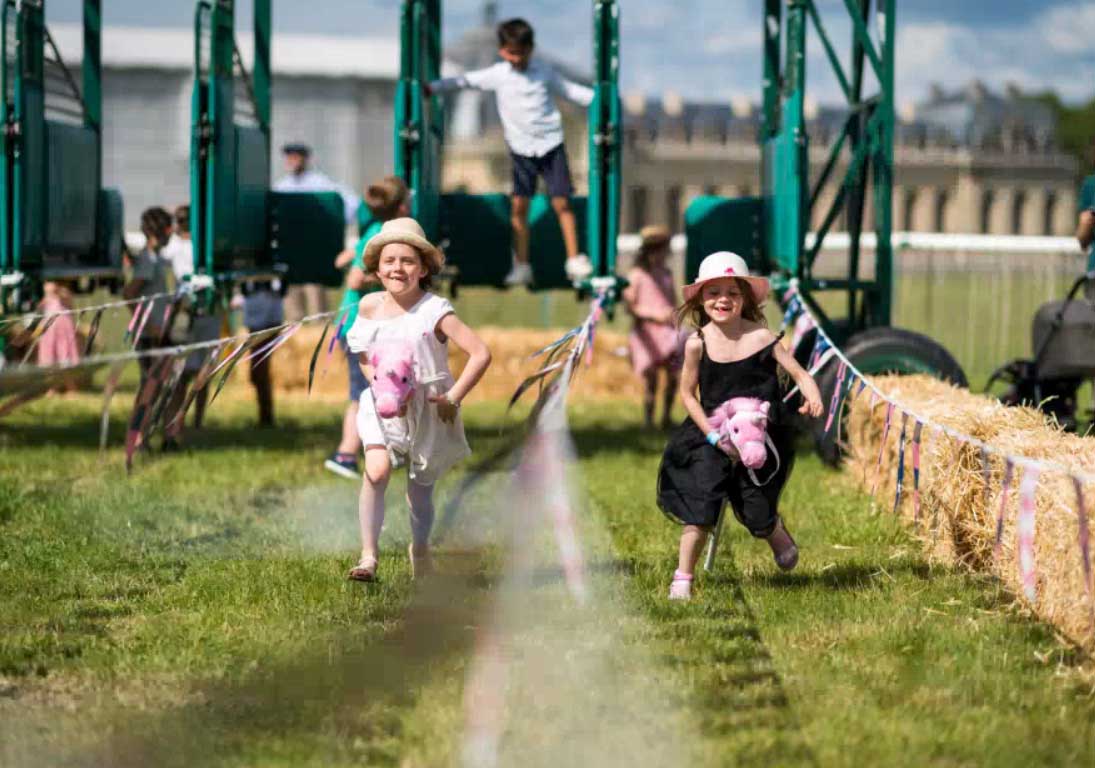 One of the highlights of the Prix de Diane Longines event is the traditional elegance contest.

To adapt to the current situation, the most elegant entrants were selected via the @FranceGalop Instagram account.

Our top tip for becoming the next Mademoiselle Diane by Longines? Let your elegance, creativity and originality run wild! 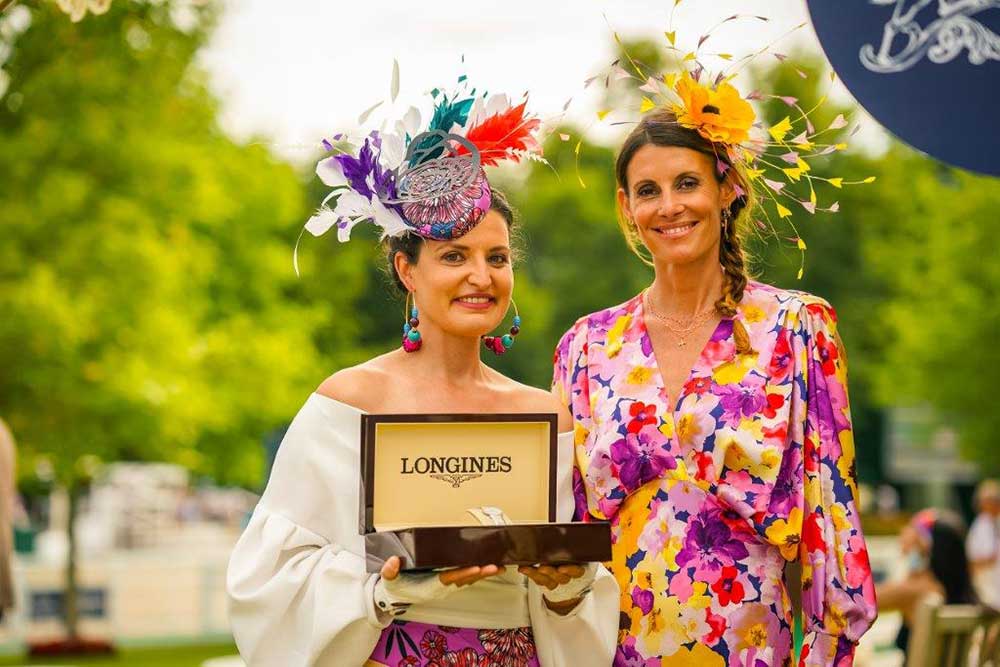 Congratulations to Sylvaine who was named Mademoiselle Diane par Longines 2021 and who won a watch from the “La Grande Classique de Longines” collection and 2 VIP passes for the Prix de Diane Longines 2022. 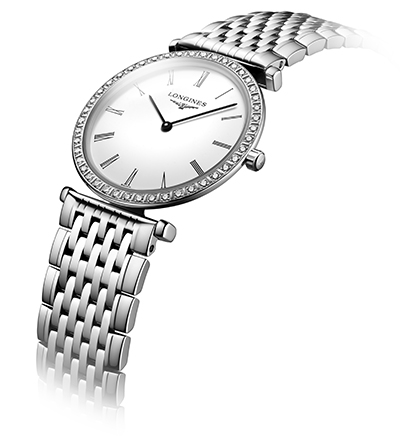 3 Win a superb weekend away: 24 hours all-inclusive at the Prix de Diane Longines

At the 2021 event, competition entrants were in with a chance of winning a superb, weekend-long racing experience…

24 hours at Chantilly, 24 hours of pure escapism, 24 hours behind the scenes at the Prix de Diane Longines.

Emma and her chosen guest, the competition winners, enjoyed a fantastic 24 hours at Chantilly thanks to the jam-packed lifestyle and sporting programme at the Prix de Diane Longines! 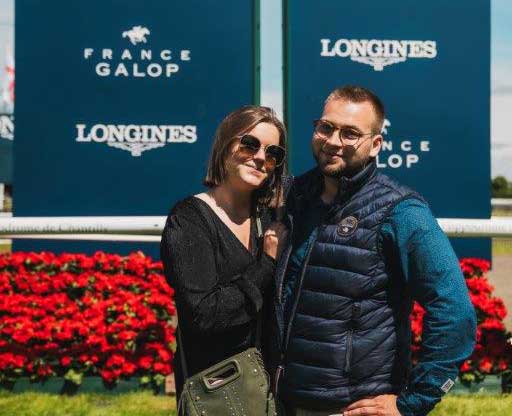 Swiss watchmakers Longines have been involved in the world of sport since 1878.

They are lending their wealth of expertise in timekeeping for equestrian events as the official timekeeper for Chantilly, Deauville and ParisLongchamp racecourses.

The Prix de Diane Longines, which is run on Chantilly racecourse in June, is a symbol of this combination of elegance, performance and precision.

The Prix de l'Opéra, a championship for females which is run during the Qatar Prix de l'Arc de Triomphe weekend, is also part of the Longines portfolio.

Longines are also partners to the International Federation of Horseracing Authorities and sponsor the international thoroughbred and jockey rankings.
The brand is also associated with racing events in Australia, the UAE and Qatar, South America, Great Britain, Italy, Ireland, Germany, Singapore, Japan, Hong Kong and China, and the United States.

Through their many partnerships, Longines are associated with the most prestigious racing events on the planet, and certainly deserve their reputation as the “timekeeper of racing”. 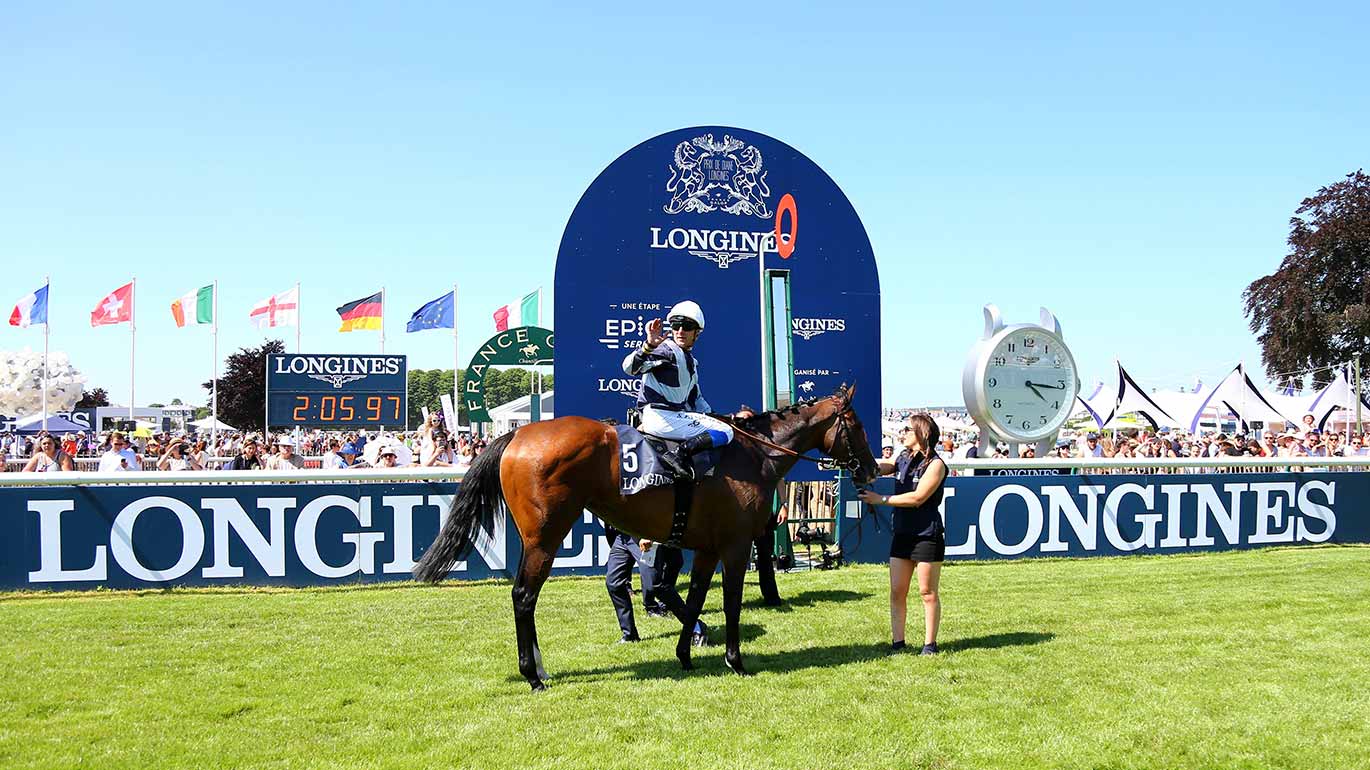 Launched in 1992, La Grande Classique de Longines has played a major role in forging the reputation of the winged hourglass brand.

This range is a symbol of Longines’ classic elegance and timeless sophistication, and stands out thanks to its very slim profile and wide palette of versions.

Designed for both women and men, this iconic collection can be seen on the wrists of all those who know how to appreciate true value.

The collection has been extended over the years, though always incorporating its original features, in particular the slim profile which is due to the unique construction of its case, the back of which holds the straps.

This technique is patented by Longines. Carved out of steel, sometimes adorned with diamonds or yellow or pink PVD, the models in this collection are available in five different sizes to adapt to all wrists and so the wearer can adopt various looks.

To receive an email alert for the opening of ticket sales, please click here.

Anyone over the age of 11 who wishes to enter the racecourse must be able to show a “Health Pass” document (as per the regulations stated by the French Ministry of Health and Solidarity).

France Galop would like to stress that, on every race day, all hygiene and social distancing measures must be respected, and masks must be worn by everyone present on the racecourse.

For safety reasons:
- pets are not allowed inside Chantilly racecourse
- enhanced security checks will be carried out at the racecourse entrance

2 How to get to Chantilly Racecourse and stay nearby

HOW TO GET TO CHANTILLY RACECOURSE

We recommend arriving as soon as the racecourse opens at 11.30 am, so that you make the most of your day at the racecourse and do not miss any of the entertainment activities organised. Closing at 8.00 pm.

A1 motorway, junction 7: Survilliers or junction 8: Senlis-Chamant, then follow signs to Chantilly
Parking available on site (€5). 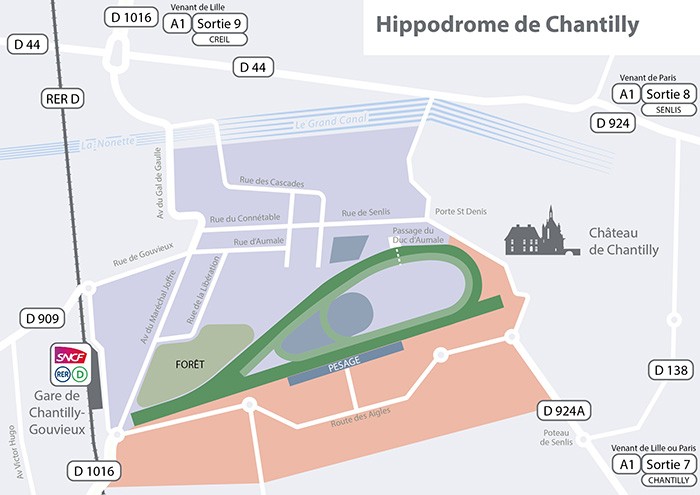 Get your tickets on ter.sncf.com and with the SNCF app while promotions last.

For the 2021 edition, we decided to pay a lot of attention on your  accomodation in order to make sure you will have a great journey.

Our  partner Revolugo has selected and negotiated the best accomodation deal  evers in order to make sure you will have a great journey.

Come and discover our stylish lounges on this elegant race day !

- Personal welcome in the lounge and a seat in a private stand
- Afternoon tea, complimentary bar with soft drinks, wines and champagne*
- 100% Diane access (Diane’s Village + Weighing Area)
- 1 parking space for every 4 people

An elegant lounge with panoramic views of the action

BOOK ALL OUR OFFERS

Pictures and offers none contractual.

Alcohol abuse is dangerous for your health, please drink with moderation.

Offers for the 2021 edition of the Prix de Diane Longines.

Oyster bar:
Served on a platter with butter and a shallot sauce.

Sliced Meat:
Grilled as you like it, while you wait! Served with salad and homemade chips.

Trueba ice creams:
For a sweet and refreshing treat!

Wine-tasting:
Wine bar set up by Kévin Bourdin, who was named best artisan in the Gault & Millau guide.
Alcohol can damage your health. Please drink responsibly.

The panoramic restaurant’s chef serves a specially-created menu at €120 per head.
A unique experience thanks to top-quality local produce and attentive service, all with sweeping views of the Château de Chantilly and its beautiful Duc d’Aumale stables.

Reservations:
By text message to +33 (0)6 33 98 57 54 or by mail at logistique@seson.fr
Please give your full name, the number of diners and a phone number.
Maximum 6 people per table.

THE WORLD’S LARGEST TRAINING GROUND FOR THOROUGHBRED IS IN FRANCE

Chantilly’s training centre, which is managed by France Galop and located just a few miles outside of Paris, is the only centre of its kind in the world. Bright and early every morning, more than 2,500 racehorses head out to train on the centre’s 2,000 hectares of gallops.

This magnificent sight is orchestrated by 110 trainers and 1,000 exercise riders.

THE CHARMS OF THE CHANTILLY ESTATE

Less than an hour’s drive outside of Paris, the Chantilly Estate houses treasures that have been passed down its line of illustrious owners: Anne, Duke of Montmorency, the Bourbon-Condé lineage, Henri d’Orléans, Duke of Aumale. The château is home to the Condé Museum and its collection of paintings, among which are masterpieces by Raphaël, Botticelli, Clouet, Poussin, Watteau, Ingres, Delacroix. Inside the château, the Cabinet des Livres library boasts 13,000 books, including the world’s most precious manuscript: Les Très Riches Heures du Duc de Berry (15th century)!

The estate’s 115 hectares of grounds are unique thanks to the hugely diverse gardens. The Grandes Écuries, a masterpiece of 18th century architecture, are among the most luxurious stables in the world. Inside, the Horse Museum gives an insight into the relationship between man and horse, while the team of 20 horses and 7 riders give performances all year round. 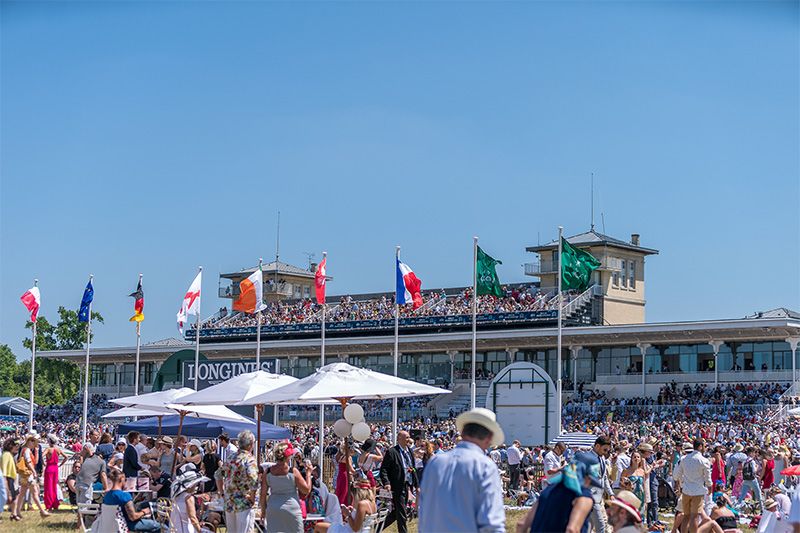 Equidia is the go-to TV channel for horse racing, and is available from all network operators.

Paris Première, one of the M6 group’s channels since 2004 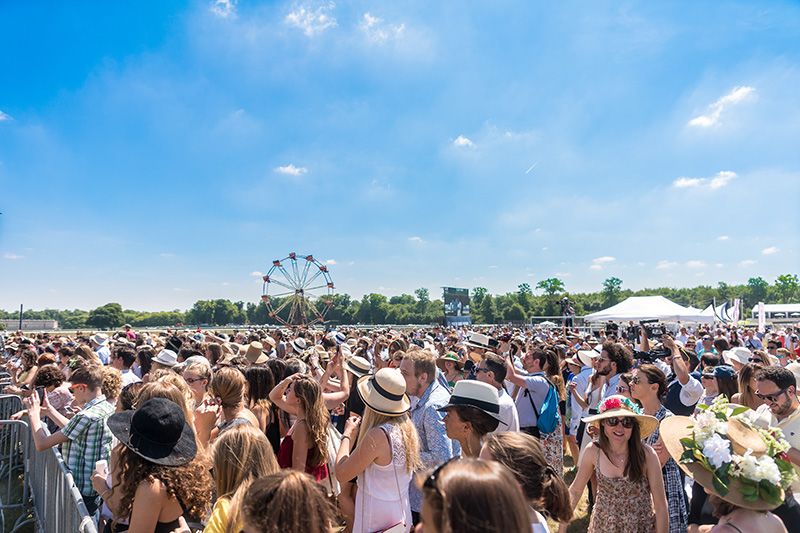